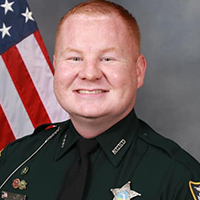 Deputy Sheriff Joshua Moyers succumbed to gunshot wounds sustained two days earlier while conducting a traffic stop near the intersection of US-301 and Sandy Ford Road.

During the traffic stop Deputy Moyers was given a false name by the driver and learned the tags belonged to a different vehicle. As he opened the driver's door to place the man in custody the subject shot Deputy Moyers in the face and back. The man fled the scene over a railroad crossing just as the arms were coming down and a train passed, blocking other deputies from immediately pursuing him.

Deputy Sheriff Moyers was transported to UF Health Jacksonville where he remained on life support until September 26th, 2021, so that his organs could be donated.

Deputy Sheriff Moyers had served with the Nassau County Sheriff's Office for over six years. He is survived by his fiancée, parents, and brother.

Because of the generosity of those who’ve chosen to Become An Ally, FRBA was able to provide financial relief to the Moyers family, in the midst of their darkest moment.