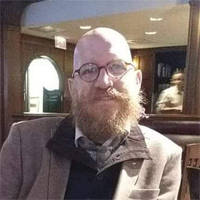 Fire fighter Seamus Culligan served the Willoughby Fire Department from 2002 to 2017. Seamus was originally from Ireland and became a United States Citizen before beginning his career as a fire fighter and paramedic. Seamus came to the U.S. from Ireland in pursuit of an engineering degree, but along the way met his wife, Cyndie (an EMT at the time), who exposed him to the world of emergency response. He was hooked from the start and pursued further studies, while serving as a volunteer fire fighter until being appointed to a position with the Willoughby Fire Department in 2002. Seamus was a member of Local 2291.

During his 15 years, he served as a member of the Lake County Tech team, the Lake County Hazardous Intervention team and a fire instructor. In 2001, after the 9/11 terrorist attacks, Seamus went to New York, Ground Zero, to help. Seamus was diagnosed with brain cancer in January of 2017 and was determined, through the Ohio SB 27 - Michael Louis Palumbo, Jr Act, to have contracted the disease in the course of, and arising out of, his employment as a firefighter. Seamus retired from active duty in late 2017.

He is survived by his wife and 3 children, of whom we had the honor of hand-delivering vital resources to help ease their financial hardship and basic needs.